Zubas Flett Law in the News: Coming out Activist 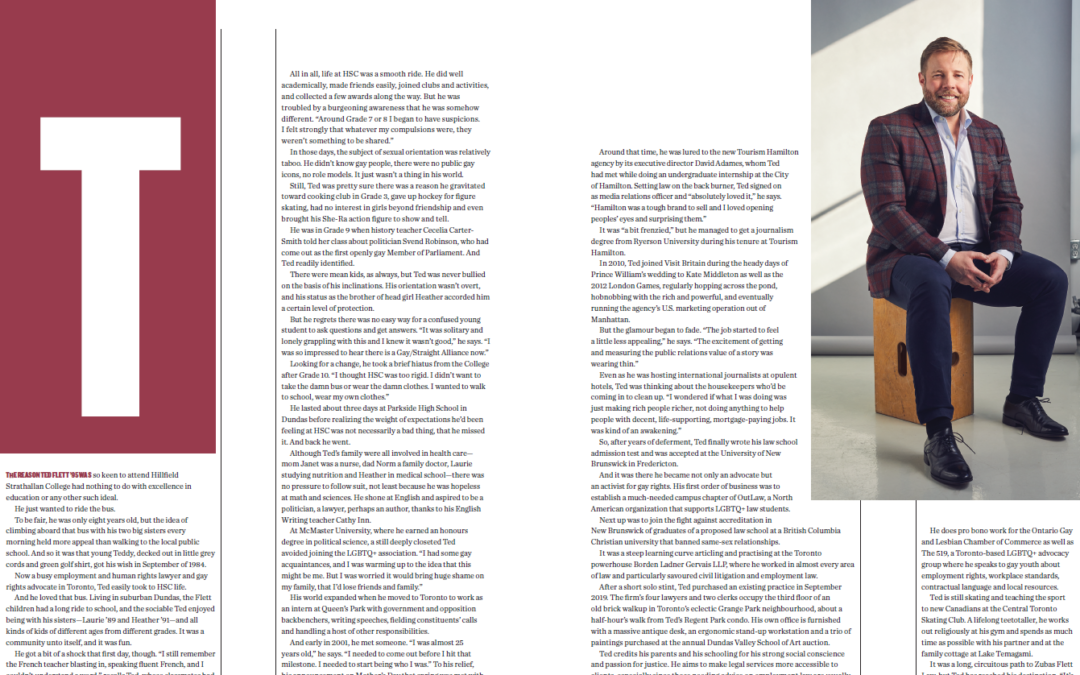 Recently, Zubas Flett Law Lawyer, Ted Flett, was featured in HSC Review, Hillfield Strathallan College’s alumni magazine. The story, which chronicled Ted’s path to activism and advocacy, can be read below. The pdf can  be found here.

The reason Ted Flett ’95 was so keen to attend Hillfield Strathallan College had nothing to do with excellence in education or any other such ideal.

He just wanted to ride the bus.

To be fair, he was only eight years old, but the idea of climbing aboard that bus with his two big sisters every morning held more appeal than walking to the local public school. And so it was that young Teddy, decked out in little grey cords and green golf shirt, got his wish in September of 1984.

And he loved that bus. Living in suburban Dundas, the Flett children had a long ride to school, and the sociable Ted enjoyed being with his sisters—Laurie ’89 and Heather ’91—and all kinds of kids of different ages from different grades. It was a community unto itself, and it was fun.

He got a bit of a shock that first day, though. “I still remember the French teacher blasting in, speaking fluent French, and I couldn’t understand a word,” recalls Ted, whose classmates had been learning the language for two years already.

All in all, life at HSC was a smooth ride. He did well academically, made friends easily, joined clubs and activities, and collected a few awards along the way. But he was troubled by a burgeoning awareness that he was somehow different. “Around Grade 7 or 8 I began to have suspicions. I felt strongly that whatever my compulsions were, they weren’t something to be shared.”

In those days, the subject of sexual orientation was relatively taboo. He didn’t know gay people, there were no public gay icons, no role models. It just wasn’t a thing in his world.

Still, Ted was pretty sure there was a reason he gravitated toward cooking club in Grade 3, gave up hockey for figure skating, had no interest in girls beyond friendship and even brought his She-Ra action figure to show and tell.

He was in Grade 9 when history teacher Cecelia Carter-Smith told her class about politician Svend Robinson, who had come out as the first openly-gay Member of Parliament. And Ted readily identified.

There were mean kids, as always, but Ted was never bullied on the basis of his inclinations. His orientation wasn’t overt, and his status as the brother of head girl Heather accorded him a certain level of protection.

But he regrets there was no easy way for a confused young student to ask questions and get answers. “It was solitary and lonely grappling with this and I knew it wasn’t good,” he says. “I was so impressed to hear there is a Gay/Straight Alliance now.”

Looking for a change, he took a brief hiatus from the College after Grade 10. “I thought HSC was too rigid. I didn’t want to take the damn bus or wear the damn clothes. I wanted to walk to school, wear my own clothes.”

He lasted about three days at Parkside High School in Dundas before realizing the weight of expectations he’d been feeling at HSC was not necessarily a bad thing, that he missed it. And back he went.

Although Ted’s family were all involved in health care—mom Janet was a nurse, dad Norm a family doctor, Laurie studying nutrition and Heather in medical school—there was no pressure to follow suit, not least because he was hopeless at math and sciences. He shone at English and aspired to be a politician, a lawyer, perhaps an author, thanks to his English Writing teacher Cathy Innes.

At McMaster University, where he earned an honours degree in political science, a still deeply closeted Ted avoided joining the LGBTQ+ association. “I had some gay acquaintances, and I was warming up to the idea that this might be me. But I was worried it would bring huge shame on my family, that I’d lose friends and family.”

His world expanded when he moved to Toronto to work as an intern at Queen’s Park with government and opposition backbenchers, writing speeches, fielding constituents’ calls and handling a host of other responsibilities.

And early in 2001, he met someone. “I was almost 25 years old,” he says. “I needed to come out before I hit that milestone. I needed to start being who I was.” To his relief, his announcement on Mother’s Day that spring was met with unqualified support and love.

Around that time, he was lured to the new Tourism Hamilton agency by its executive director David Adames, whom Ted had met while doing an undergraduate internship at the City of Hamilton. Setting law on the back burner, Ted signed on as media relations officer and “absolutely loved it,” he says. “Hamilton was a tough brand to sell and I loved opening peoples’ eyes and surprising them.”

It was “a bit frenzied,” but he managed to get a journalism degree from Ryerson University during his tenure at Tourism Hamilton.

In 2010, Ted joined Visit Britain during the heady days of Prince William’s wedding to Kate Middleton as well as the 2012 London Games, regularly hopping across the pond, hobnobbing with the rich and powerful, and eventually running the agency’s U.S. marketing operation out of Manhattan.

But the glamour began to fade. “The job started to feel a little less appealing,” he says. “The excitement of getting and measuring the public relations value of a story was wearing thin.”

Even as he was hosting international journalists at opulent hotels, Ted was thinking about the housekeepers who’d be coming in to clean up. “I wondered if what I was doing was just making rich people richer, not doing anything to help people with decent, life-supporting, mortgage-paying jobs. It was kind of an awakening.”

So, after years of deferment, Ted finally wrote his law school admission test and was accepted at the University of New Brunswick in Fredericton.

And it was there he became not only an advocate but an activist for gay rights. His first order of business was to establish a much-needed campus chapter of OutLaw, a North American organization that supports LGBTQ+ law students.

Next up was to join the fight against accreditation in New Brunswick of graduates of a proposed law school at a British Columbia Christian university that banned same-sex relationships.

It was a steep learning curve articling and practising at the Toronto powerhouse Borden Ladner Gervais LLP, where he worked in almost every area of law and particularly savoured civil litigation and employment law.

After a short solo stint, Ted purchased an existing practice in September 2019. The firm’s four lawyers, including veteran Loreta Zubas, and two clerks occupy the third floor of an old brick walkup in Toronto’s eclectic Grange Park neighbourhood, about a half-hour’s walk from Ted’s Regent Park condo. His own office is furnished with a massive antique desk, an ergonomic stand-up workstation and a trio of paintings purchased at the annual Dundas Valley School of Art auction.

Ted credits his parents and his schooling for his strong social conscience and passion for justice. He aims to make legal services more accessible to clients, especially since those needing advice on employment law are usually least able to afford it.

He does pro bono work for the Canadian Gay and Lesbian Chamber of Commerce as well as Friends of Ruby, a Toronto-based LGBTQ+ advocacy group where he speaks to gay youth about employment rights, workplace standards, contractual language and local resources.

Ted is still skating and teaching the sport to new Canadians at the Central Toronto Skating Club. A lifelong teetotaller, he works out religiously at his gym and spends as much time as possible with his partner and at the family cottage at Lake Temagami.

It was a long, circuitous path to Zubas Flett Law, but Ted has reached his destination. “It’s where I am meant to be.”