Records of Employment (ROEs): 8 Must Knows 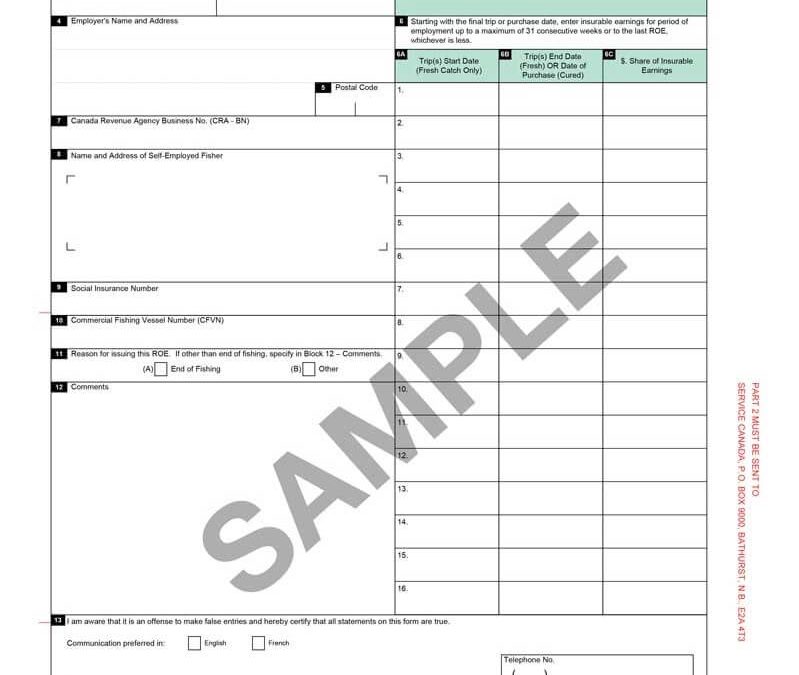 The Record of Employment (ROE) is a critical document that employees use to apply for Employment Insurance (EI) benefits, which are administered by Service Canada, under the purview of Employment and Social Development Canada (ESDC).

Employers are required to issue an ROE any time there is an interruption in an employee’s earnings. This can occur for a number of reasons and, below, we answer some of the most common questions that employers and employees have about ROEs.

Why does an employer have to fill out the ROE?

The ROE is essential to the EI benefits application process, therefore it is important that it is filled out accurately.

ESDC reviews ROEs in its determination of the following:

Issuing an accurate ROE will assist an employee in accessing the appropriate type and amount of EI benefits in a timely manner.

Filling out ROEs can be administratively burdensome and difficult for employers and, because of the potential penalties involved, strict adherence to the process is necessary.  Service Canada has published a 60-page guide to assist employers when they fill out an employee’s ROE however it appears that this guide may not be as helpful as intended.

This complexity has been compounded by insufficient resources to keep up with processing demands and an out-of-date technology platform that is over 40 years old. The result is a processing system that often requires a high degree of human intervention, resulting in delays in processing and delays in citizens receiving EI benefits.

An employer can also contact Call Centres for assistance, but these are overwhelmed, a situation not helped by the current significant increase in questions related to the COVID-19 situation.

What are Insurable Earnings?

Insurable Earnings are certain monetary earnings from Insurable Employment. Most jobs in Canada are considered insurable employment as long as an employee has an employer who controls their wages, schedule and work tasks.

There are certain jobs that are excluded from insurable employment. For example, a person who is employed by an international organization, or a person who controls more than 40% of voting shares of a corporation. Generally, employees and employers pay EI premiums into the EI program. Insurable Earnings are the total amount earnings used to determine the amount of certain EI benefits an eligible claimant may receive.

What code should be entered as the Reason for Issuing the ROE (Block 16)?

The reason for issuing an ROE must be entered at “Block 16” of an ROE, using one of a series of specific codes. This code is used to indicate the reason an employee’s earnings are interrupted.

A code must be entered for all employees whose earnings are interrupted, including casual and part-time employees.

The specific codes have different implications on a claimant’s EI application. For example, inserting the code “M” for dismissal may raise a question with Service Canada whether the dismissal was “for cause” or not. Should an employee dispute the code, Service Canada will commence an investigation.

Generally, employers who have entered an incorrect code have done so because of an honest mistake. If they acted in good faith, they will not be given a penalty. However, if ESDC discovers that the employer provided false or misleading information, the Canada Employment Insurance Commission has the authority to impose a penalty.

Penalties for knowingly providing false, or misleading, information can lead to a fine of up to $5,000 or imprisonment for not more than 6 months or both.

A summary of the current Block 16 codes can be found here.

How and when must the ROE be issued?

Two options to issue an ROE are available to an employer.

The first method is filing by standard paper document, which is obtained from Service Canada. The form comes in triplicate and must be completed correctly.

A paper ROE must be completed within five calendar days from the later of:

An alternate, and now more common option, is that an employer can file an electronic ROE through their Service Canada account. This is commonly done by the employer’s payroll provider, based on input from the employer.

An electronic ROE must be filed within five calendar days from the earlier of:

Importantly, it is the responsibility of the employer to ensure the ROE is completed on time.

As stated earlier the penalty for the employer not abiding by the Employment Insurance Act, 1996, obligations can lead to a fine, imprisonment or both. Therefore it is important that the employer completes the ROE as accurately as possible and ensures it is filed on time.

In addition to penalties levied by the federal government, employers could also be liable for general damages suffered by their employees due to the failure to issue an ROE in a timely manner.

In another wrongful dismissal case, Morison v Ergo-Industrial Seating Systems Inc., the employer’s “particularly troubling” conduct included taking two (2) months to provide the employee with his ROE, alleging ‘cause’ for dismissal without any reasonable basis, and delaying in paying minimum statutory entitlements, which caused severe financial difficulties for the employee. As the employer was aware of the employee’s financial situation, and the delay was used as financial gain for the employer, an award of $50,000 was granted to the employee in punitive damages. Importantly, the presiding judge, P. E. Roger J., stated that he granted such a large award because this “should deter the defendant and others from similar misconduct in the future, and should mark the community’s collective condemnation of what has happened, thereby achieving retribution, deterrence, and denunciation.”

What is an “interruption of earnings”?

An ROE must be completed any time there is an interruption in insurable earnings, no matter the reason for the interruption. An interruption of earnings could occur because an employee is dismissed , or laid off, retires, resigns, or commences a leave of absence from work (including pregnancy leave, parental leave, compassionate care, medical leave).

An interruption of earnings occurs when an employee has, or is expected to have, seven consecutive calendar days without work, or if there is a 60% reduction in their regular weekly earnings.

Information needed to fill out an ROE

In order to properly fill out an ROE, an employer must provide detailed information, including the following:

How to speed up the process

In order for an employee to receive their EI Benefits more quickly, an employer may wish to avoid entering details in Block 18, the “Comments” field. When a comment is included in Block 18, the ROE is removed from the automated processing system and Service Canada has to review it manually. This slows the process down, and may require an agent to call the employer, as well as the employee, for clarification. Comments should only be entered in Block 18 in exceptional circumstances and should not include comments that only confirm information that has already been entered on the form.

The Government of Canada has stated in their “ROE Secure Automated Transfer (ROE SAT) 4.0 – User Guide” that:

A common question asked by employees, when their employer issues their ROE electronically, is how to access it.

If you are an employer or an employee and have questions about the legal obligations relating to ROEs, contact Zubas Flett Law at 416-593-5844 or questions@employment-lawyers.ca