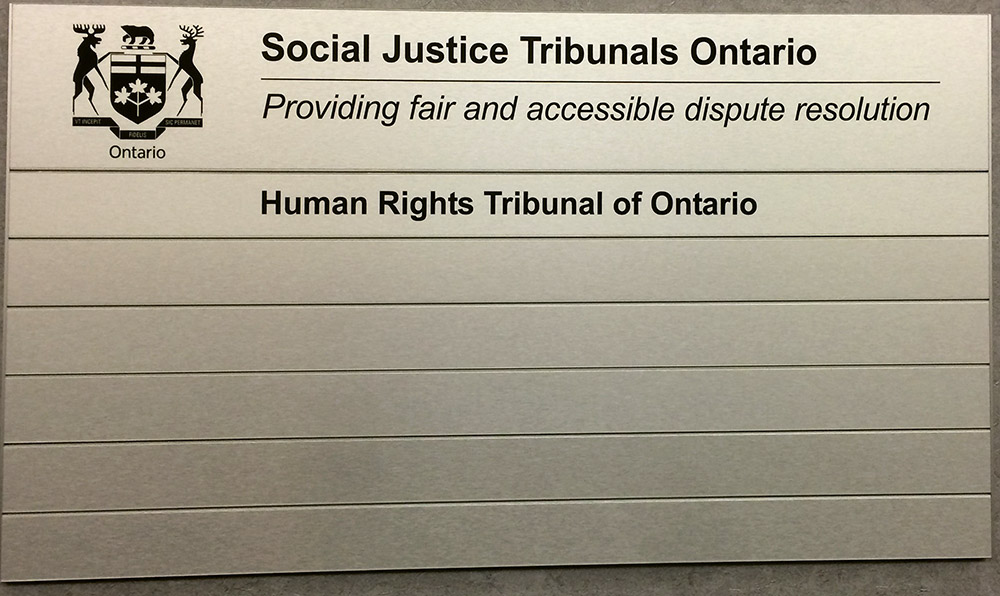 Time is of the essence in addressing matters of human rights. Initiating and responding to applications to the Human Rights Tribunal of Ontario (the “HRTO” or the “Tribunal”) can be a daunting process for applicants and respondents, but it ought to be done swiftly. The stakes are high for both applicants seeking redress for breach of their human rights and respondents answering to serious allegations, such as discrimination and harassment, leveled against them.

Individuals who experience human rights issues in the course of their employment (or work as a contractor) should quickly seek legal advice to avoid missing important deadlines.

Failure to Respond to an Application

Upon being notified of a human rights Application against them, respondents should promptly seek legal advice as to how they should respond.

Where a respondent does not respond, including where they attempt to evade being delivered an Application, the Application may go forward and be decided without their participation. Further, the Tribunal may find that the respondent is deemed to have accepted all of the allegations against them.

In the outcome, the Tribunal may make a public finding that a respondent violated the applicant’s human rights. In addition to any fallout of such decision, the respondent may also be left owing a significant amount of money to the applicant as compensation for lost income and injury to dignity.

In responding to an Application, an important issue which should be canvassed is whether the Application was filed on time. Application forms require the applicant to specify the date of the last event in question.[1]  If an application has been filed late, it may be dismissed in part or entirely on a preliminary basis, without all of the costs, time and energy of a full hearing.

In highly-limited circumstances, the Tribunal may permit late applications to proceed. If an Application is not submitted within the appropriate time period, the applicant must provide a reason in “good faith” as permitted by section 34(2) of the Code, which states:

A person may apply … after the expiry of the time limit … if the Tribunal is satisfied that the delay was incurred in good faith and no substantial prejudice will result to any person affected by the delay.

Notably, the Tribunal applies this time limit more strictly than one may expect. The Tribunal will only allow a delay in exceptional circumstances. For example, in rare situations, the delay may be permitted if the applicant was hospitalized during the relevant time period, preventing the Application from being filed on time.

In a leading case of Miller v. Prudential Lifestyles Real Estate, 2009 HRTO 1241 (CanLII), the Tribunal stated the following regarding “good faith” and the importance of the one (1) year limitation:

[24] In my view, where an applicant seeks to establish that a delay in filing an application was “incurred” in good faith, the applicant must show something more than simply an absence of bad faith… The mandatory one-year limitation period is consistent with the policy objective, expressed elsewhere in the Code, that human rights claims should be dealt with expeditiously.  Thus, the Code requires an individual to act with all due diligence, and file their application within one year, when they may seek to pursue a human rights claim.

Further, in the often cited case of Lutz v. Toronto (City), 2009 HRTO 1137 (CanLII), Vice-chair Sheri D. Price cited Busch v. Amos, 1994 CanLII 7454 (ONSC), where the court stated that “it is not enough for a party who must establish good faith to say that he or she was ignorant of their rights…”

The case of James v. Human Rights Tribunal of Ontario, 2018 ONSC 5537 (CanLII) highlights how stringently the time limits to file applications are applied. In James, the Tribunal dismissed an Application because it was filed one day late. The applicant attempted to have the Tribunal’s decision set aside through judicial review, to no avail. The Court found that the Tribunal was reasonable in concluding that “the Application was filed outside of the one-year period and that there was no evidence that this delay occurred in good faith.”[4] Again, this case underscores the Tribunal’s strict enforcement of timelines to file an Application.

The Tribunal’s analysis of what is considered a series of events can be complex. It is important that the parties turn their minds to the dates of the incidents in question and how a chain of events may be linked together.

Human Rights and the Courts

Time periods for addressing violations of the Code though the Courts are outside the scope of this article. Speak to a lawyer about the possibility of initiating a civil claim for breach of the Code and the applicable timelines.

Finally, as a result of laws passed in response to the COVID-19 Pandemic, certain limitation periods were suspended for 26 weeks. Speak to a lawyer to determine how the timelines may impact your matter.

Applicants and respondents with questions about the HRTO’s limitation periods, rules, procedures and human rights in general, should contact Zubas Flett Law for counsel. Contact us at 416-593-5844 or  questions@employment-lawyers.ca.